We're happy to meet you. Let us know how we can help you.

Continue to Xurpas Inc. Group of Companies Learn more about Xurpas Enterprise that offers products & services for your digital transformation 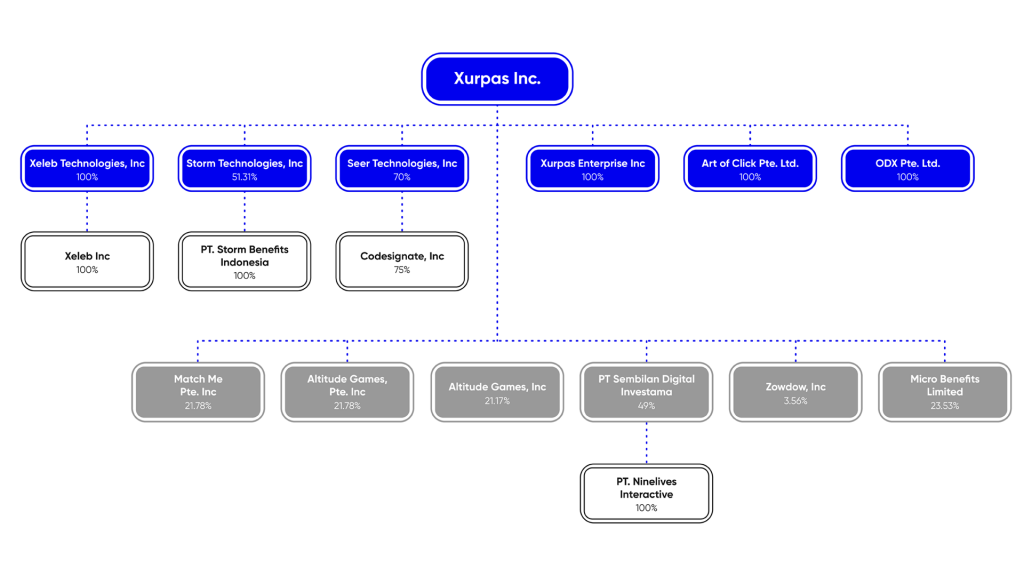 Nico Jose S. Nolledo, Filipino, 43, has been the Chairman and Director of the Corporation  since 2001. He is the first Filipino Entrepreneur chosen by the Endeavour network. He is also the Ernst and Young’s 2015 Philippine Entrepreneur of the year and was chosen as one of The Outstanding Young Men (“TOYM”) in the Philippines in 2015. Mr. Nolledo holds a Bachelor of Science degree in Management from Ateneo de Manila University.

Alexander D. Corpuz, Filipino, 53, was appointed as Director and President of the Corporation effective February 1, 2019. He has also been the Corporation’s Chief Finance Officer since 2014 and Chief Information Officer since 2018. Mr. Corpuz has 29 years of experience in the field of finance, ten years of which was in investment and commercial banking. He was Vice President of Bank of America in 2001, before serving as CFO for Liberty Telecoms, Information Gateway, Mañosa Group of Companies and Hatchd Inc. Mr. Corpuz holds a Bachelor of Science in Business Administration degree from University of the Philippines, Diliman, Cum Laude. He obtained his Masters in Business Management from the Asian Institute of Management, Makati City. He is a member of the Financial Executives Institute of the Philippines (FINEX).

Fernando Jude F. Garcia, Filipino, 46, has been the Chief Technology Officer and Director of the Corporation since 2001. He was also appointed as Treasurer effective February 1, 2019. He also served as Corporate Secretary of the Corporation until December 2014. He created the Corporation’s Griffin Platform, the mobile consumer content gateway and platform for all of the Corporation’s mobile consumer content products and services. He also created the Corporation’s modular middleware system that can easily integrate with any modern billing gateway. He is the chief engineer responsible for the Corporation’s software architecture and systems integration. Examples of such systems and protocols are the following: SMS (CIMD2/EMI-UCP/SMPP), MMS (EIAF/MM7), Voice Services (SIP), Billing/IN (Diameter/UCIP/ParlayX2.1), Security (IPSEC), Publish-subscribe Systems and Video Streaming (RTMP/HLS) and blockchain technology (BTC/ETH). He is also responsible for architecting the Corporation’s fully Cloud-based system infrastructure. Before founding the Corporation, he was a software developer in iAyala. Mr. Garcia holds a Bachelor of Science degree in Applied Physics from the University of the Philippines in Diliman, Quezon City.

Wilfredo O. Racaza, Filipino, 71, has been a Director of the Corporation since 2001.Mr. Racaza has 49 years of marketing and finance experience under his belt. He was the head of New Business Development in Mobil Oil Philippines for 15 years. He previously worked as an insurance executive in Manulife Financial Philippines for 33 years. He is a Registered Financial Consultant (Graduated Cum Laude in May 2015). He has garnered numerous accolades and multiple awards such as Branch of the Year recognitions and consistent agency sales awards. He has been a consistent awardee in the General Agents and Managers Association (GAMA) of the Philippines from 2003 to Present. Mr. Racaza holds a Bachelor of Science in Commerce Degree Major in Accountancy from Xavier University (Ateneo de Cagayan) in Cagayan de Oro City.

Jonathan Gerard A.  Gurango, 62, Filipino, has been an independent director of the Corporation since 2014. Mr. Gurango has a solid track record in forming and running successful software companies. He founded Match Data Systems (MDS) in Seattle, USA in 1987, MDS Philippines in 1991, and MDS Australia in 1996. In 1999, he sold MDS to Great Plains Software, which was acquired by Microsoft in 2001. Mr. Gurango served as the Asia Pacific Regional Director for Microsoft Business Solutions, before he left in 2003 to form Gurango Software. In 2007, he was inducted into the Hall of Fame for Microsoft’s Most Valuable Professionals, in recognition of his mastery of software technology and business. In 2006, the Philippine Center for Entrepreneurship acknowledged him as one of the country’s Ten Most Inspiring Technopreneurs. In addition to leading Gurango Software as the most successful Microsoft Dynamics partner in the Philippines, he has co-founded several other software start-ups such as SPRING.ph, and was the President of the Philippine Software Industry Association from 2013 to 2014. Mr. Gurango studied Industrial Engineering at the University of the Philippines, Diliman, Quezon City. He also studied Electrical Engineering at the University of Washington, Seattle, Washington, USA.

Imelda C. Tiongson, 52, Filipino, has been nominated as Independent Director. She is currently the President of Opal Portfolio Investments (SPV-AMC) Inc. She is currently an independent director of Fin Tech Global Resources Inc. and Ovo Worldwide Trading Corporation, and a Trustee of Fintech Philippines Association. Ms. Tiongson is also involved in several organizations; She is a Trustee of the Institute of Corporate Directors, Vice Chair of the Governance Committee of the Management Association of the Philippines, and the Head of Technoethics and Chair of Governance for Fintech Alliance. She is also a lecturer for Risk Management for International Finance Corporation (an entity affiliated with the World Bank Group) and Institute of Corporate Directors (ICD). She is also a lecturer in Ateneo Graduate School of Business – Center for Continuing Education.
She previously worked as a Senior Lending Officer in National Australia Bank and as Senior Vice President of Philippine National Bank. She was also a director of Vitarich Corporation and a board advisor of East Asia Power Corporation.
Ms. Tiongson also participated in the groups that drafted the Revised Corporation Code which was enacted in 2019 and the Financial Rehabilitation and Insolvency Act of 2010.
Ms. Tiongson obtained her Bachelor of Business in Accountancy from Royal Melbourne Institute of Technology. She also completed a Master Class on Remedial in Asian Institute of Management (AIM), Master Class in Blockchain/Cryptocurrency facilitated by Terrapinn and Master Class in Risk/Audit conducted by Worldbank ICD.

Bartolome Silayan Jr., 53, Filipino has been nominated as Independent Director. He is currently the President of Phoenix One Knowledge Solutions Inc. (“Phoenix One”), a technology corporate training company which he started in 2005. He is also the President of Cafisglobal Inc, a boutique software services company serving clients in Australia. Prior to Phoenix One, he also founded Mind Stream Inc. in 2001, the franchise holder of NIIT, the largest technology education company from India.  Before he became an entrepreneur, he was the Philippine Country Head of The Pillsbury company in 1997. He worked in Hongkong and China in 1994 as Marketing Manager for the Quaker Oats company handling the Gatorade brand. He finished BS Business Management from Ateneo de Manila University and obtained his MBA from Northwestern University’s Kellogg school of management.

Mark S. Gorriceta, 42, Filipino, has been the Corporate Secretary and Chief Legal Officer of the Corporation since 2014. He was also appointed as Chief Compliance Officer of the Corporation in 2018. Atty. Gorriceta has been in the practice of law for fourteen years. He acts as legal counsel to several other listed companies, its subsidiaries or affiliates. Atty. Gorriceta also serves as Chief Legal Counsel and/or Corporate Secretary to several leading online and tech companies in the Philippines. He is the Managing Partner and heads the Corporate Group of Gorriceta Africa Cauton & Saavedra. A member of the Philippine Bar since 2005, he holds a Bachelor of Arts, Political Science degree from the Ateneo de Manila University. He also attended certificate courses in Finance at the Asian Institute of Management in Makati City.